As a sign of school pride, crowds of Quaker fans perform a unique ritual. After the third quarter of football games, spirited onlookers unite in the singing of “Drink a Highball,” which refers to the University’s unofficial cocktail, the Pennsylvanian, made with Calvados, a dash of Madeira Wine, an egg white, and a twist of lemon. In years long past, students would literally make a toast with the drink to the success of Penn’s athletic teams. During Prohibition, stubborn students insisted on keeping their tradition – since they could not use alcohol, they had no choice but to literally “toast” Penn. As the last line, “Here’s a toast to dear old Penn,” is sung, the fans send toast hurling through the air onto the sidelines. In another version of the origins of toast throwing, in 1977, a student threw the first slice of toast after being inspired while attending a showing of The Rocky Horror Picture Show where members of the audience throw toast at the screen. In more recent years, some students have become more creative in their choice of projectiles, and it is not rare to see a hail of bagels or donuts, or even a loaf of French bread come flying down from the stands. 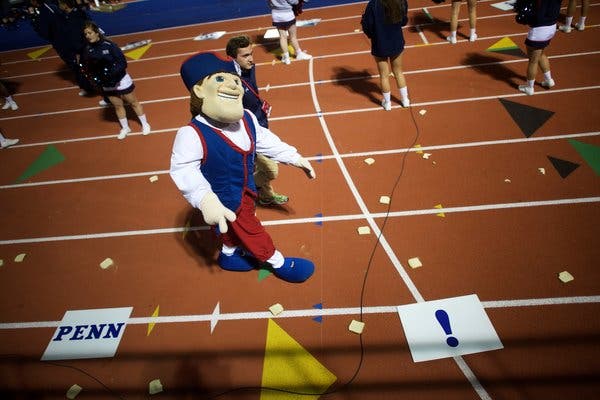 At midnight on the eve of the first Microeconomics 001 midterm exam, hundreds of students (predominantly freshmen) try to release stress by participating in a collective shout on the Junior Balcony of the Lower Quadrangle. This tradition has been upheld by the Freshman Class Board, a branch of Penn’s student government, as their inaugural Board event every year. 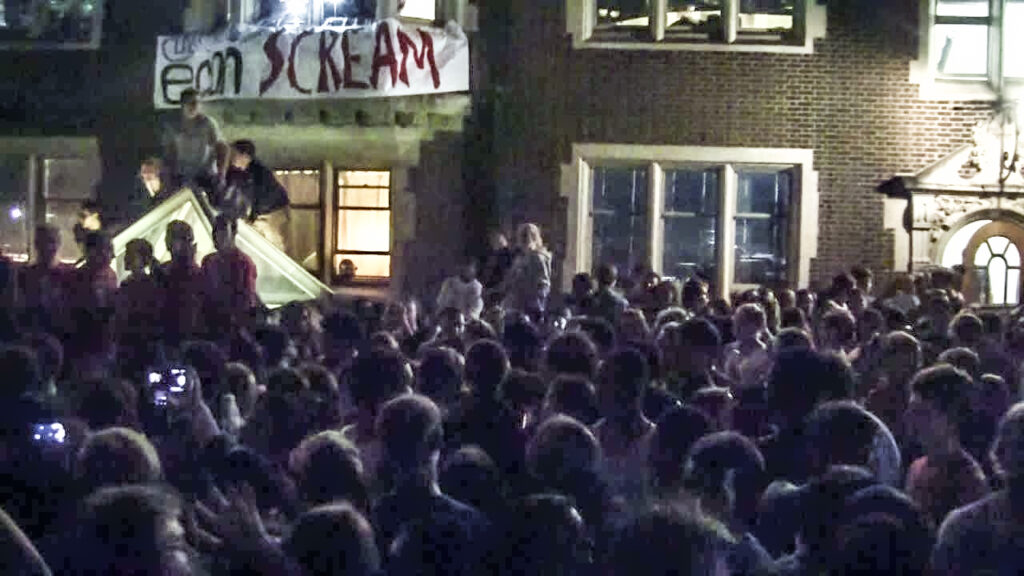 Started with the Class of 2021, U-Night is the final addition to the Penn traditions experience. The event is one of the four times, along with Convocation, Hey Day, and Graduation, where all the students of the Sophomore class will be together in the same place. 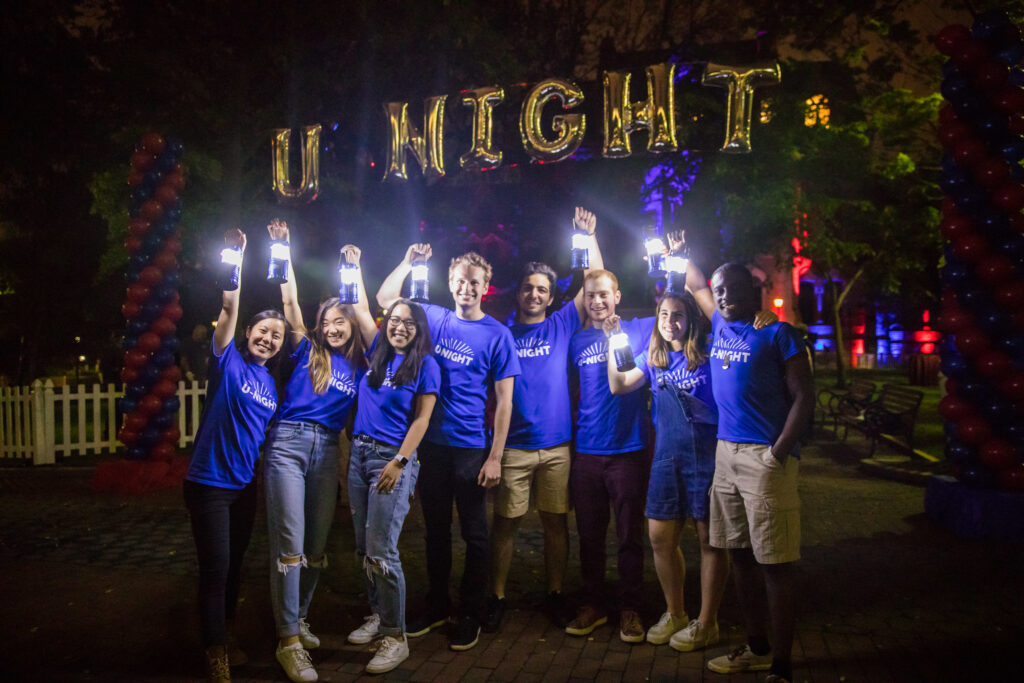 In April, several class traditions are celebrated. Class Day, which began in 1865 to supplement the final graduation exercises, celebrates the progression of all classes and the departure of the seniors. In 1916, this day merged with Straw Hat Day and became the “day of two events.” In 1931, Hey Day arose from these two celebrations. On this day, the juniors gather on High Rise Field for a picnic, don straw “skimmers” and canes, and march triumphantly down Locust Walk to College Hall.

The procession tradition began in 1949. More recently, the straw skimmers have changed to styrofoam hats, and classmates take bites out of one another’s hats. When the procession reaches College Hall, the students make an arch with their canes to greet the President of the University. The outgoing and incoming senior class presidents then give speeches, and the juniors are “officially” declared seniors. In May 2015, the university commemorated the celebration of the 100th Hey Day. 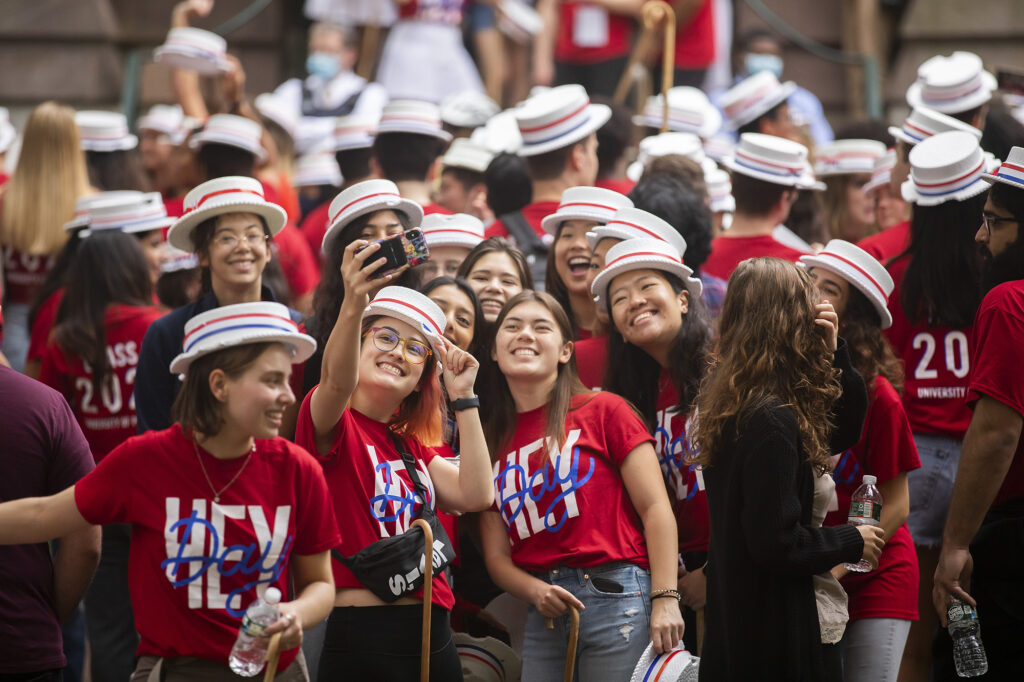 One plants ivy by a building, and an “Ivy Stone” is placed on the building to commemorate the occasion. In 1981, the day was officially moved to the Saturday before Commencement. Also on this day, the Spoon, Bowl, Cane, and Spade awards, honoring four graduating men and the Hottel, Harnwell, Goddard, and Brownlee awards, honoring four graduating women, are presented. During the celebration, a noted individual who is chosen by the class gives an address. Recent Ivy Day addresses have been presented by Penn Parent Joan Rivers, former Philadelphia Mayor and Governor of Pennsylvania (and also a Penn alumnus) Ed Rendell, and basketball player Julius Erving.

The building receiving the Ivy Stone is very often a building of some significance to the graduating class. For example, in 1983, a stone was placed near the field in Franklin Field celebrating Penn’s first Ivy League championship in football since 1959 the previous fall—at the yard line from which the game-winning field goal against Harvard was kicked, clinching at least a share of the championship. 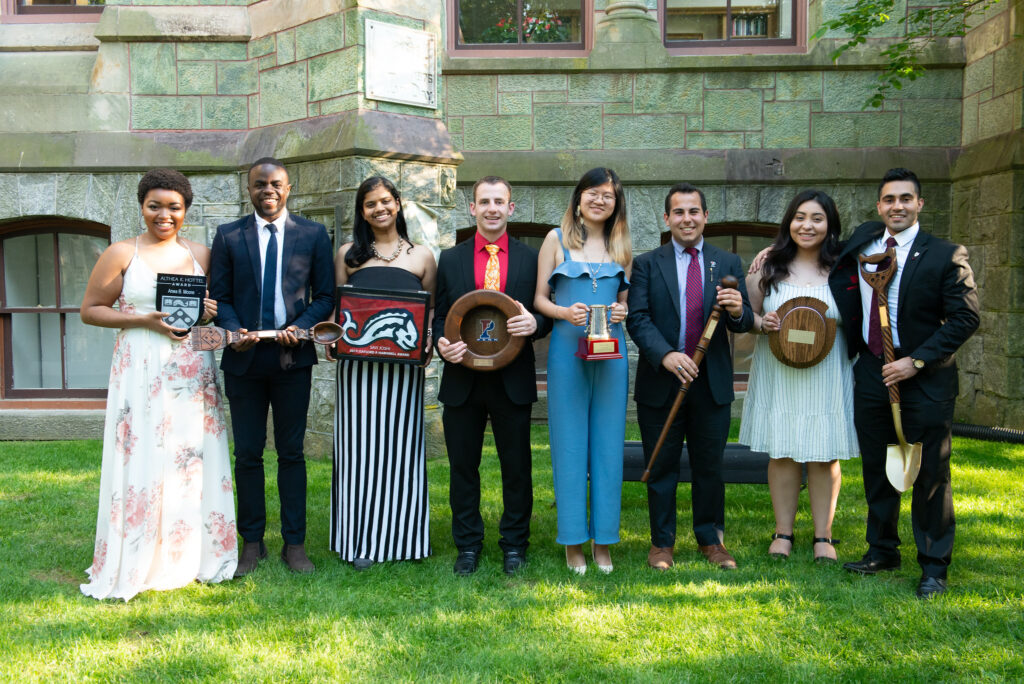 Spring Fling is an annual festival for the students at the end of each Spring semester, usually beginning on the Friday of the second to last week of the semester and continuing until Saturday night. Fling, which began in 1973, is dubbed the largest college party on the East Coast and is hosted by the university’s Social Planning and Events Committee. The event takes place on College Green, Wynn Commons, and The Quadrangle (or Quad.).  College Green becomes a staging area for carnival games and carnival food. Two stages in the Quad host Penn’s performing arts groups. Saturday night, Penn holds a festival on College Green, and Friday night SPEC (The Social Planning and Events Committee SPEC – Bringing events to Penn since 1989) brings in a headlining musical act for a concert. Past guests for this concert have included Wyclef Jean, Busta Rhymes, Sonic Youth, and Of A Revolution. The 2007 concert featured Ben Folds and Third Eye Blind. The 2008 concert was moved to Franklin Field since it featured a triple-bill of Ludacris, Gym Class Heroes, and OK Go. 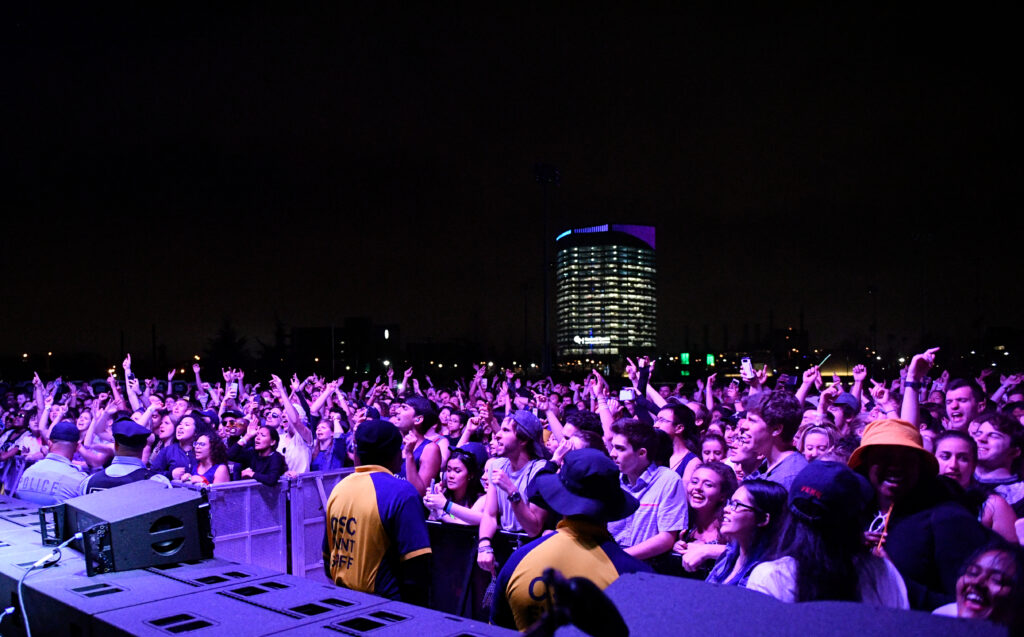 Feb Club (originally a Yale tradition) is a tradition in which the members of the senior class attend a party or other special event every day for the entire month of February. Those with a perfect record of attendance have their name inscribed onto a Plaque in Smokey Joes Bar.

Taking advantage of Penn’s location in the city of Philadelphia, members of the senior class don Walnut Walk themed shirts and embark on a day-long, citywide pub crawl, starting at 2nd Street near the waterfront and moving westward along Walnut Street until participants arrive at Smokey Joe’s on 40th Street, just south of Walnut. The event is one of the highlights of “Senior Week,” in which seniors celebrate the end of their time at Penn. 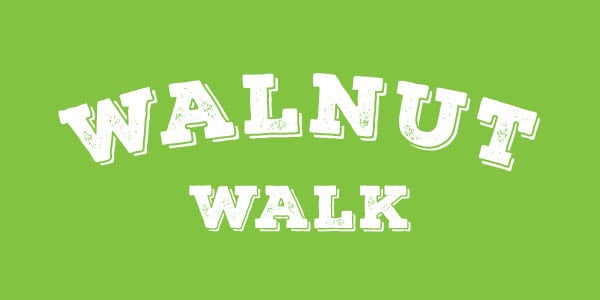 Convocation is a Penn tradition that dates to 1910 (and perhaps, on an informal basis, earlier). Though the format may have changed over the years, this event is a significant marker in the lives of Penn undergraduates. This is the first ceremony for the entire incoming Class of 2025. They will come together again on Hey Day in their junior year, and at Commencement in their senior year. 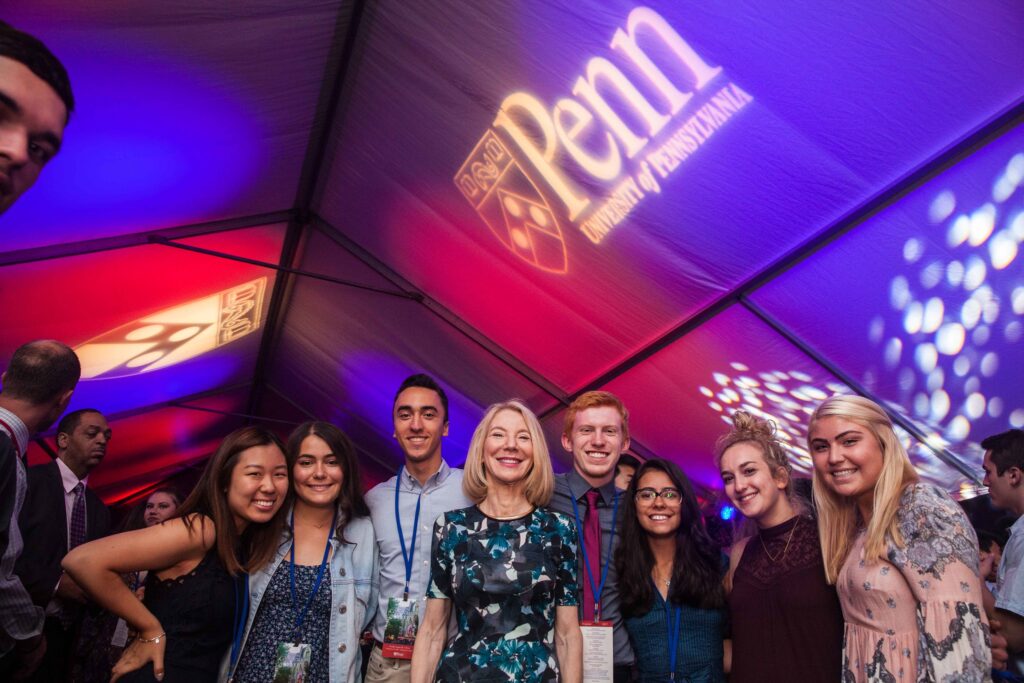 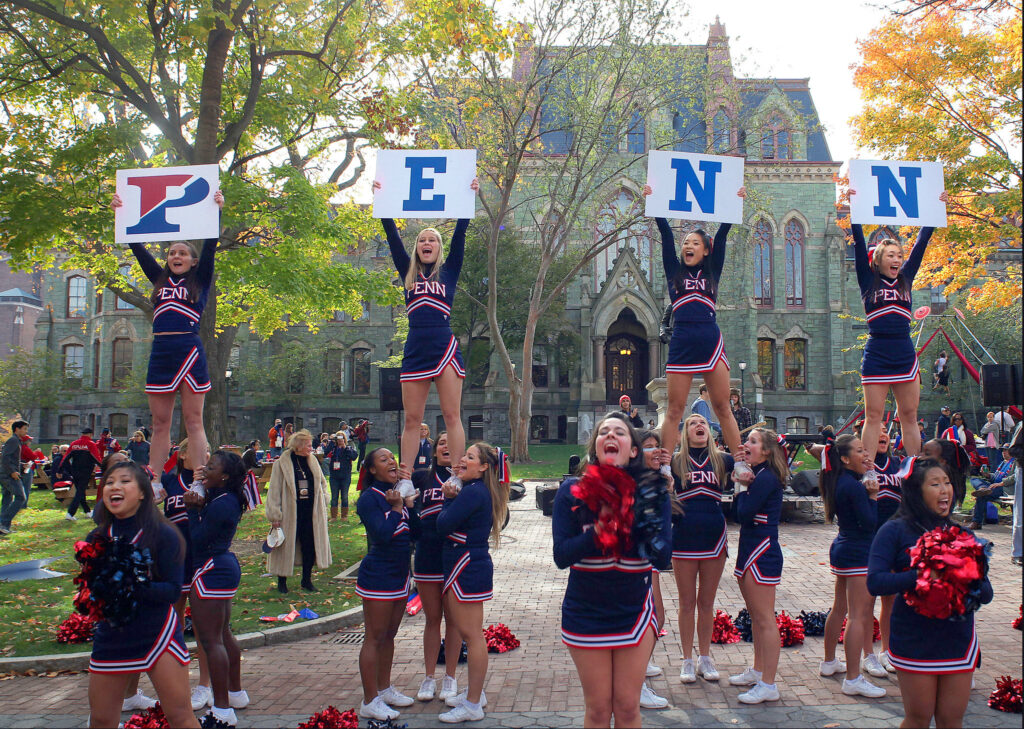 The Penn Relays (also Penn Relays Carnival) is the oldest and largest track and field competition in the United States, hosted annually since April 21, 1895, at Franklin Field.  In 2012, there were 116 events run at the meet and more athletes run in the Penn Relays than do any other track and field meet in the world.[It regularly attracts more than 15,000 participants from high schools, colleges, and track clubs throughout North America and abroad, notably Jamaica, competing in more than 300 events over five days. Historically, the event has been credited with popularizing the running of relay races. It is held during the last full week in April, ending on the last Saturday in April. Attendance typically tops 100,000 over the final three days and has been known to surpass 50,000 on Saturday. 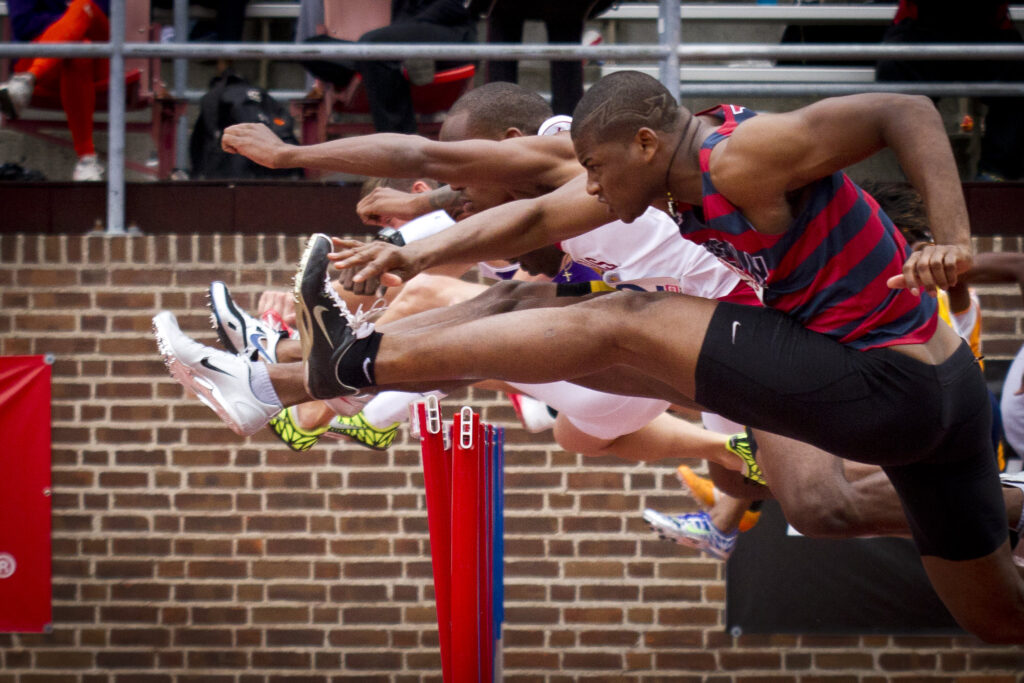 This long-standing tradition of the Glee Club, which started annually over a decade ago, has become a welcoming sight for Penn students and faculty each Valentine’s season. Members of the club are separated into quartets — consisting of one tenor, two baritones, and one bass singer — before traveling around campus fulfilling numerous order requests in between their classes. 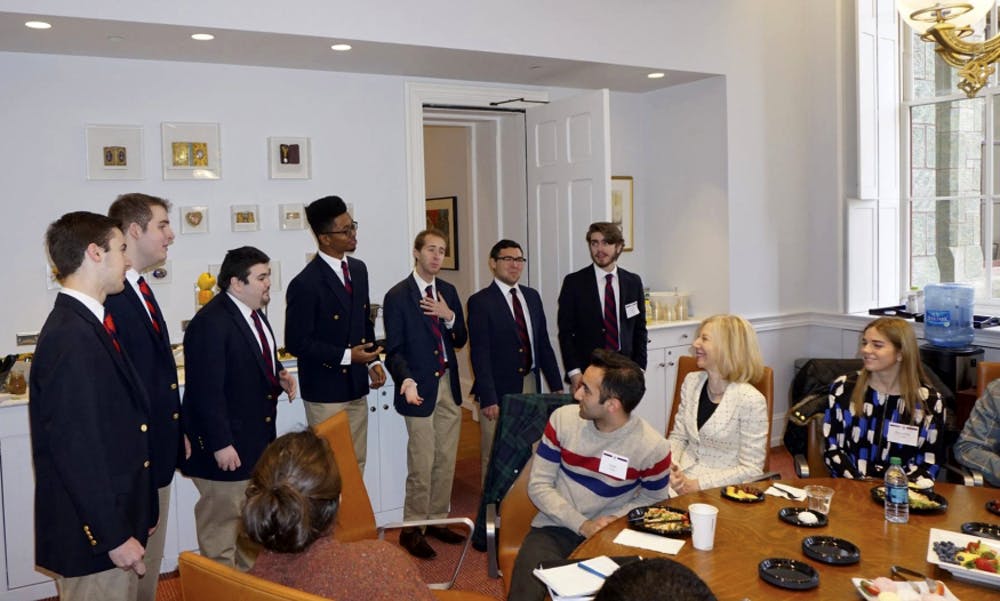